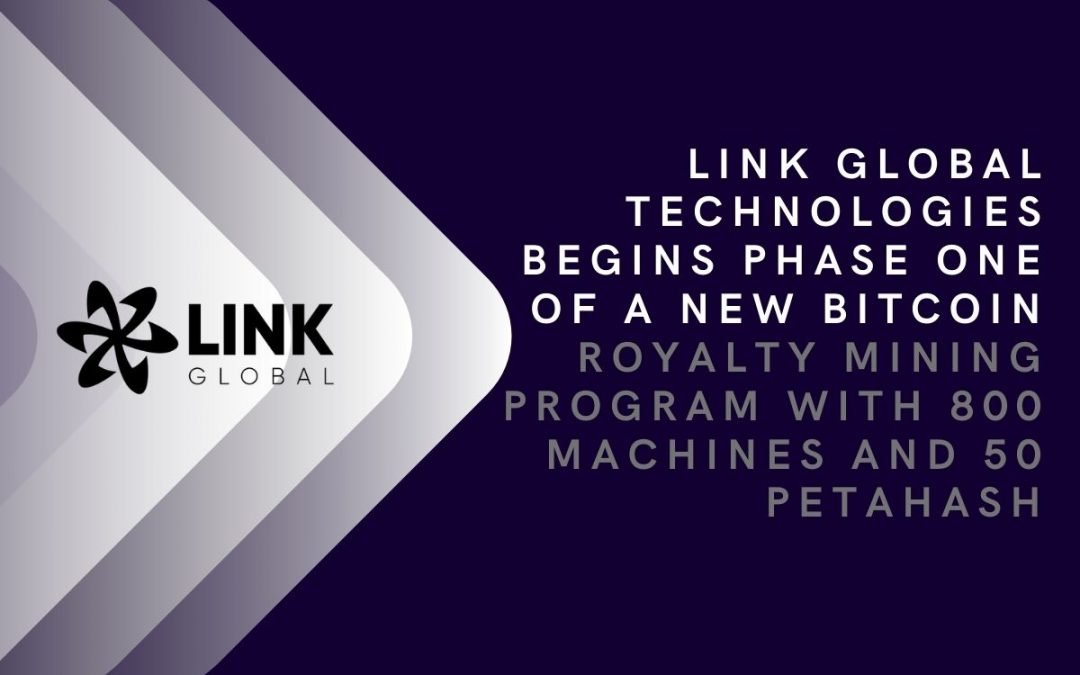 VANCOUVER, BC, CANADA, FEBRUARY 22, 2021, LINK GLOBAL TECHNOLOGIES INC. (CSE: LNK; FRA: LGT; OTC: LGLOF) (“LINK” or the “Company”), an innovative power and infrastructure solutions provider for Bitcoin mining and data hosting operations, as previously announced on February 3, 2021, the Company is pleased to announce that it has begun the  power and royalty mining program on schedule February 21, 2021, and is planning on 2,600 bitcoin miners for self-mining and royalty share in the near term.

A private, arms-length company delivered 800 machines capable of generating over 50 Petahash (PH), or approximately 0.35 Bitcoins (BTC) per day, at today’s difficulty. The agreement includes a base rate charge for power and a share of the BTCs mined.

President and CEO Stephen Jenkins comments, “this agreement allows LINK to generate revenue in two ways; a Power Purchase Agreement (PPA) and a royalty agreement. Our arrangement is attractive for several reasons; the immediacy of revenue with BTC earnings and the stable income from the PPA. Link is very active in its efforts to achieve its stated goal of 1,000 PH, either self mining or royalty sharing, by the end of 2021 and plans further acquisitions of hash power in the near future.” Jenkins goes on to say, “it is a flexible business model that allows us to respond to the changing market conditions.  When we originally set up in Alberta in June of 2020, Bitcoin earnings had just halved and the price of BTC was trading between USD $9,000 to USD $10,000. The  fluctuations in the key indicators of price, difficulty rate and global hash rate means that all requires flexibility built on low power costs. We believe our business model capitalizes on all of this.”

Under the agreement, LINK will manage the machines, and the private company will send a percentage of the net profit to LINK on a bi-weekly basis. As previously announced, this came into effect on February 21, 2021.

Progress has been steady on the opening of  LINKs third facility in Alberta, a 10 MW site which is fully subscribed with mining machines and is planned to generate over CAD $350,000 per month in revenue to LINK. The extreme cold weather in early February caused a short break in the construction process but energizing is expected to occur at the end of February. Jenkins comments, “with an overabundance of new machines coming to market in the next 8 months power will be a high priority. Similar to 2017, there are companies with machines and no place to plug them in. We are in an excellent position to capitalize on these opportunities.”

UPDATE ON LETTERS OF INTENT WITH STARCO AND PNS

As previously announced on  November 11, 2020, and  January 28, 2021, LINK is collaborating on the delivery power in both arrangements. Progress is steady, however the recent bitter cold in Texas and COVID travel restrictions have impacted the site visits and therefore the completion of the contractual arrangements. Stephen Jenkins comments, “Link plans to extend the LOI’s on both agreements as there is real potential for shareholder value. We are in constant communication with the partners on both projects. The executions of both transactions are very viable and achievable in the calendar year extending our business beyond the Canadian borders. We are importing expertise where needed but we are also exporting our own expertise to other countries.”

Link is engaged in providing infrastructure and operating expertise for digital mining and data hosting operations. Link’s objectives include locating and securing, for lease and option to purchase, properties with access to low-cost, reliable power, and deploying this low-cost power to conduct digital mining and supply clean energy and infrastructure for other data-hosting services.

The CSE has not reviewed and does not accept responsibility for the adequacy or accuracy of this release.

CAUTIONARY STATEMENT REGARDING FORWARD-LOOKING INFORMATION.  This news release contains “forward-looking statements” within the meaning of applicable Canadian securities legislation. Forward-looking statements consist of statements that are not purely historical and include any statements regarding beliefs, plans, expectations or intentions regarding the future. Often, but not always, forward-looking statements can be identified by the use of words such as “plans”, “expects”, “is expected”, “forecast”, “budget”, “scheduled”, “estimates”, “forecasts”, “intends”, “anticipates”, or “believes”, or variations (including negative variations) of such words and phrases, or statements that certain actions, events or results “may”, “would”, “could”, “should” or “might” occur. Forward-looking statements made in this news release include, but are not limited, to: statements with respect to the Agreement and the terms and potential benefits thereof; that the parties will enter into the definitive partnership agreement and the terms thereof, including the timeline for same; that Link’s significant expertise in international projects and government relationships will assist the development of these projects; and that the initiatives are slated to begin implementation in fiscal Q1 2021.  Forward-looking statements made in this news release relate to: the Company’s intent to obtain and close the Offering on the proposed terms outlined in this news release; the intended use of the net proceeds from the Offering; and other matters relating to the Company’s business plans.  All such forward-looking statements are based on factors or assumptions that were applied in drawing a conclusion or making a forecast or projection, including assumptions based on historical trends, current conditions and expected future developments. Since forward-looking statements relate to future events and conditions, by their very nature they require making assumptions and involve inherent risks and uncertainties. The Company cautions that although it is believed that the assumptions are reasonable in the circumstances, these risks and uncertainties give rise to the possibility that actual results may differ materially from the expectations set out in the forward-looking statements. In the case of the Company, these risks, uncertainties, assumptions and other factors include, without limitation: that the parties may not enter into a definitive partnership agreement at all or on the terms announced; that actual results from the partnership may differ materially from the parties’ expectations; those set out in the Company’s most recent MD&A, fluctuations in the price of electricity, fluctuations in the price of digital currencies/Bitcoin, the future potential halving of Bitcoin, increases in the network difficulty rate and price of digital currencies/Bitcoin, negative changes in the level of digital currency/Bitcoin rewards per block, the securing of economic rates for the purchase of power, the opportunities for acquiring digital currency mining hardware, unanticipated changes in laws, regulations or other industry standards affecting the business of the Company, reliance on key management personnel, the Company’s ability to implement its business plan, litigation risk, stock price volatility, the effects of general economic and other factors beyond the control of the Company, and other matters that may occur in the future. Given these risks, undue reliance should not be placed on these forward-looking statements, which apply only as of the date hereof. Other than as specifically required by law, the Company undertakes no obligation to update any forward-looking statements to reflect new information, subsequent or otherwise.